There is a crime wave going on all over the world 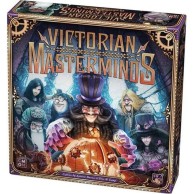 There is a crime wave going on all over the world

There is a crime wave going on all over the world. Police forces from every nation are stretched too thin. To make matters worse, Sherlock Holmes, the world’s greatest detective, has gone missing. Supervillains the world over are completing their grand works and unleashing them upon the defenseless population. But, in the end, only one of these evildoers will reign supreme.

In Victorian Masterminds, players take on the role of a villain in the final stages of their grand scheme to take over the world. The plans for their mechanical monstrosities are finished, all that’s left to do is get the last few parts required, fire it up, and take it out on the road. But a mastermind can’t do it all on their own. By sending their various Agents across the world to major cities, each with their own special ability, the players will gain resources, steal buildings, kidnap scientists, and sabotage each-other’s plans. But only one will claim the top spot and rule the world.