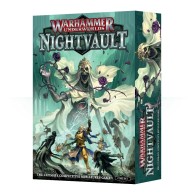 Shadespire was once a city of wonder and magic, a mercantile metropolis whose rulers defied death, to the fury of Nagash. During the height of the city’s powers, rivals, thieves and would-be conquerors were locked away in the sprawling dungeon known as the Nightvault. After the city’s fall, Nagash broke open the chains that bound the shackled spirits within, giving them weapons to freeze the hearts of the living and enough memory of their torment to fill them with hatred and jealousy. The spectral dead delight in the chance to inflict this hatred upon the living, and the streets of Shadespire echo to the sounds of terrifying screams and cruel, mocking laughter...

In Warhammer Underworlds, you and your opponent pick a warband – 2 are included in this box – and build a deck of power and objective cards. After placing your warband on the hex-tiled game boards, you take turns making actions – movement and attacks – until 3 phases are played. Between actions, you can use the power cards to introduce effects and reactions that can swing the battle in your favour; building the best deck you can and using cunning to deploy these abilities at the perfect time is the secret to mastering the game and dominating your foe. Merely vanquishing your opponent’s warband does not guarantee victory – capturing objectives, standing your ground, making the best tactical choices and deploying the right cards at the right time will gain you the glory points you need to win!

Once you’re familiar with the rules, games will take around 30 minutes – you’ll always have time for a rematch.

Everything you and a friend need to play games of Warhammer Underworlds is included in this box. Contained within:

- A Stormcast Eternals warband – Stormsire’s Cursebreakers – made up of 3 push-fit, blue plastic miniatures (Rastus the Charmed, Ammis Dawnguard and the leader, Averon Stormsire);
- A Nighthaunt warband – the Thorns of the Briarqueen – made up of 7 push-fit, bone-coloured plastic miniatures (The Ever-Hanged, Varclav the Cruel, the leader Briar Queen and 4 Chainrasps whom Nagash has not afforded the dignity of names). Both of these warbands are Easy To Build, with no glue necessary and a comprehensive, easy to follow construction guide;
- A 32-page rulebook, including the story of Shadespire’s rise and fall, the opening of the Nightvault, the background of the 2 included warbands and all the rules you need to play – including new scatter mechanics, rules for resolving magic spells, and the use of lethal hexes, sections of game board that are fatal to those pushed in;
- An 8-page quick start guide, covering the contents of the box, understanding your cards, movement and attacks, and playing your first game;
- 2 double-sided game boards, featuring hexes and objectives;
- 2 pre-built decks of power and objective cards – 96 in total – for use with the included warbands;
- 10 double-sided Fighter cards, providing the stats and information needed for the fighters in each warband at a glance;
- 5 attack dice, 3 defence dice and 3 magic dice;
- 11 double-sided objective tokens;
- A scatter template;
- 30 wound tokens;
- 46 double-sided glory point tokens;
- 15 double-sided move and charge tokens;
- 15 Guard tokens;
- 8 activation counters.

Warhammer Underworlds has an intense, fast and fun core ruleset, but the book contains a host of extras - new game modes, competitive and multiplayer rules:

- Matched Play: designed for competitive play, this is a set of rules that level the playing field to the finest degree – perfect for fast, friendly rivalries and tournaments;
- Multiplayer games: extra rules that allow you to combine 2 core sets of Warhammer Underworlds to create 3-or-4-player games, with clarified rules for resolving attacks and adjustments to victory conditions.

Also included is a glossary for quick and easy reference and a sample chapter of The Mirrored City, a Black Library novel set in Shadespire.