1840 is an 18xx game that tells the story of Vienna’s tramway system. 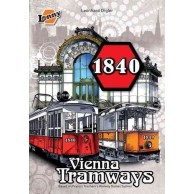 1840 is an 18xx game that tells the story of Vienna’s tramway system.

1840 is an 18xx game that tells the story of Vienna’s tramway system. Each player controls a holding company that can operate up to three tramway lines. Each of these lines lay track and stations on the map and run its trains, earning income from the stations they run through. All money is collected in the holding company and every couple of turns a company round commences where the players have to decide how much money they will pay out to the shareholders and how much will be kept in the holding company for better trains, more stations, and track building.

In stock rounds players can invest in other players' companies or in the Stadtbahn, which can also be used by the various tramway lines to exercise special powers.

1840 uses the basic concept of all 18xx games, but offers quite a few innovations, like all-Diesel trains from the beginning on, that do not become obsolete, but have reduced income as they grow older.