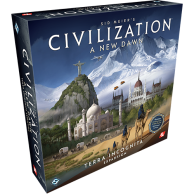 When Alexander had dismounted, his father kissed him, saying: “My son, seek thee out a kingdom equal to thyself; Macedonia has not room for thee.

Beyond the borders of your nascent civilization, a great unknown awaits - a vast expanse of empty map, sparsely decorated with sketches of fantastic creatures and "here be dragons". As you advance through the ages, your civilization will sprawl outward into these new lands, encountering other nations like your own, but your civilization will never get there if not for the brave explorers who first venture out beyond the familiar...