In Ruins of Mars players are competing to build out their arsenal of knowledge. 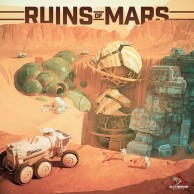 In Ruins of Mars players are competing to build out their arsenal of knowledge.

In Ruins of Mars players are competing to build out their arsenal of knowledge. They must understand the languages of ancient civilizations that colonized Mars, making it a hub of economic activity. Though, the year is now 2179 and the Earth's future seems bleak. Earth's only hope is to learn the reasoning why Mars faced its demise as see if their technologies can be used to prevent further decay on Earth.

The game is played around a board with ten communal cards. Players will pick up any stack of cards and then place them down in a mancala like fashion (they must place a card on the space they picked the cards up from) and then they place other cards around the rest of the board. Each of the five locations on the board have different effects on the cards placed there.

The goal of the game is to earn the most points, which is done by learning martian technologies, learning their languages and studying cards (studied cards have an additional bonus effect). Players can chose an action to study cards at one of the sites on the board instead of playing its ability and have ways to earn temporary focus tokens, which will allow them to spend a token for a one-time use bonus effect.

Each technology can be purchased with a mixture of three resource types, which are earned through certain cards on the board.

There are three levels of technologies to be learned and three rows in the tableau (for a total of 9 cards) the game ends when either someone fills out their tableau or when when three markers are at the top of the language learning board, which players advance on through the use of certain cards on the board.