The Incubi are an order of Drukhari that hone themselves for war and war alone. 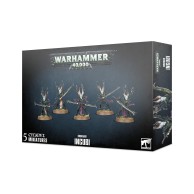 The Incubi are an order of Drukhari that hone themselves for war and war alone.

The Incubi are an order of Drukhari that hone themselves for war and war alone. Warriors of the highest calibre, they dedicate themselves to the perfection of the killing strike. Despite the Incubi’s monk-like asceticism, no shred of virtue exists in their bloodstained souls, for though they profess a desire to achieve perfection in every aspect of their existence, their true goal is simply to kill as often as possible.

Often employed in Commorragh as bodyguards, Incubi are considered as more trustworthy than other Drukhari. More heavily armoured than their kin and carrying lethal blades, many Archons consider the use of Incubi as a status symbol. Add these elite warriors to your army and ensure the success of your realspace raids.

This kit is supplied in 68 plastic components and comes with 5 28.5mm Citadel round bases and a 25mm round base. It builds either 5 Incubi or 4 Incubi and a Klaivex. The Klaivex can be assembled either with a pair of joined demiklaives or separated demiklaives and also has a choice of two heads. The kit also includes a single-piece Drukari symbol that could optionally be used as an objective marker.