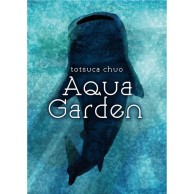 In Aqua Garden, you're the owner of an aquarium and want to stock its six tanks with a variety of sea life, but you have a limited amount of funds and only one employee on hand to place the fish in the tanks. Do your best to outshine the other aquariums in town!

A game lasts 3-4 rounds depending on the number of players. You have your own aquarium board with six tanks, and a shared player board has sea creatures placed at random on its perimeter. Seaweed and coral tokens are placed on the separate sea board, along with five random sea creatures.

During a round, whoever is farthest back on the perimeter of the shared board takes the next turn, moving their owner as many spaces as they want to an empty space, then taking the action of that space. If you stop on an advertising space, you receive funds based on what's currently in your tanks. If you stop on a sea creature space, you take them all, move your single employee 1-3 spaces clockwise on your aquarium board, then place the creatures in one or both tanks adjacent to the employee. (If the employee passes the feeding event card you were randomly dealt at the start of the game, then you receive funds from the bank based on how well the creatures in the two tanks next to the feeding event card match that card.)

Each tank has only 4 units of oxygen available, so you can't add creatures to a tank that would consume more oxygen than this. You can add one seaweed to each tank, however, to increase the available oxygen to 6. You must also observe other placement restrictions, such as keeping sharks separate from fish and sea turtles. Additionally, you can pay to purchase creatures, seaweed, and coral from the sea board.

If during your turn, the contents of one or more of your tanks matches one of the four randomized milestones on display, you mark the highest empty space on that milestone with a token. The first player to achieve each milestone receives a related creature that they can place in any tank.

If you've circled the board, you wait for other players to finish, then start a new round, with players moving out in the order that they arrived. After the game ends, players score points for the milestones achieved, funds remaining, order in which they finished, and the sets of creatures they've collected in each tank.

Aqua Garden includes manta rays, remoras, and flapjack octopuses that can be added to play to create new scoring opportunities.

In the Kickstarter-exclusive Outdoor Expansion for Aqua Garden, the player now has an additional tank, the Outdoor aquarium.

Each player will receive a unique meeple - either a whale, an orca, a dolphin or a sea lion - each having a unique ability, as well as a special outdoor tank. Once per round, the player has the option of placing a creature in the outdoor aquarium instead of the indoor ones, to either gain 2 funds or activate special abilities.

The Outdoor Expansion also adds a new type of advanced pieces: the Jellyfish, which counts as a joker fish piece to complete milestones.