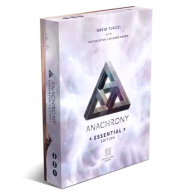 It is the late 26th century. Earth is recovering from a catastrophic explosion that exterminated the majority of the population and made most of the surface uninhabitable. The surviving humans organized themselves along four radically different ideologies: Harmony, Dominance, Progress and Salvation.
Followers of the four Paths live in a fragile peace, living in almost complete isolation next to each other.
Now an even more terrible cataclysm is looming on the horizon: an asteroid is heading towards Earth. The time travel technology discovered in the wake of the old cataclysm is the best way to prepare for the impending impact; and it is up to the Leaders if they see it as a threat or as a potential.

Anachrony is a competitive Euro-style strategy game set in a post-apocalyptic world rebuilt along four different  ideological Paths. The game is played through a series of turns called Eras, with past ones reachable through time travel later in the game. Players assume the roles of iconic leaders of the four Paths, striving not only for the supremacy and well-being of their people, but also their survival. After the fourth Era, an asteroid impact shakes Earth, threatening to destroy the World Capital, Earth’s last independent city. The Paths should prepare for the coming cataclysm, and when the time comes, take their part in evacuating the collapsing Capital. In the end, one of the Paths will be the new home to  the reformed World Council, and lead humanity into a new future.

The game itself is language independent, the product  contains English, German and French rulebooks and player aids.