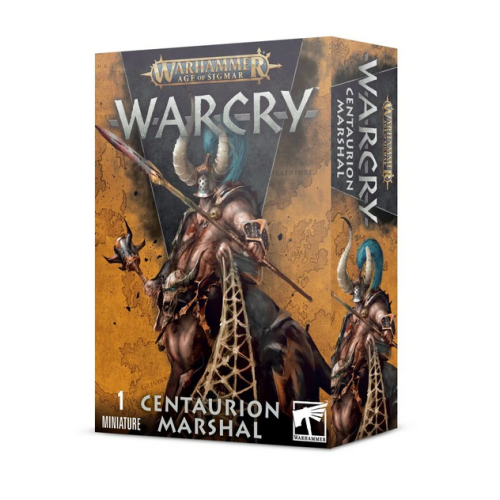 Centaurions are terrifying creatures, their strength and skills honed in the Varanspire's warpits. Charging headlong into the fray on iron-hard hooves, Centaurions wreak havoc with each of the deadly weapons gripped in their four arms – ensnaring, skewering, bludgeoning, and trampling any who stand before them. The Marshals are the strongest amongst their kind, risen from the arena into the ranks of powerful warbands and legions – yet despite their bestial ferocity, these are also creatures of great cunning and subtlety, sworn to gather warbands in shadowy service to their Dark Master.

This multipart plastic kit build one Centaurion Marshal, a massive eight-limbed warrior armed with an array of weapons. Rearing up on his hind legs, tail and top-knot swaying behind him, this model makes an eye-catching addition to any Chaos collection – and the gladiatorial style of his armour fits perfectly with the other denizens of Archaon's fighting pits, such as the Chaos Legionnaires who share his worship of Be'lakor.

The Centaurion Marshal can join any Chaos warband in games of Warcry using the included fighter and ability cards (in English, French, Italian, German, Spanish, Chinese, Japanese, and Russian). It can also be fielded as a mighty Hero for Slaves to Darkness armies in Warhammer Age of Sigmar, using free rules available to download from the Warhammer Community website.

This kit comprises 22 plastic components and is supplied with a Citadel 80mm Round Base, as well as a fighter card and an ability card for using the Centauroid Marshal in your games of Warcry. This miniature is supplied unpainted and requires assembly – we recommend using Citadel Plastic Glue and Citadel paints.